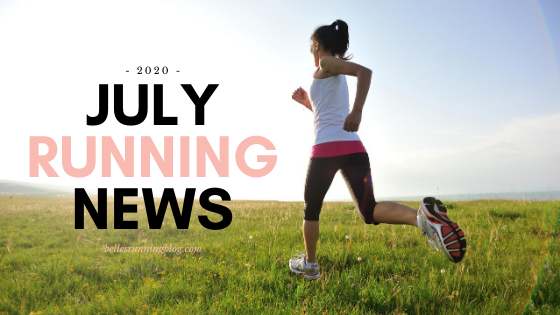 Let’s take a look at some of the running articles making the headlines this month.

Coronavirus has had a massive impact on alternative and outdoor exercise forms now that gyms and pools are closed which has led to a significant increase in runners joining the running community.

It’s no wonder that the super popular Couch to 5k has been trending on Twitter this month now that the warmer weather has crept upon us which earns a well-deserved spot in this month’s running news.

People who have never run before have been donning their trainers and hitting the pavements and I for one have definitely noticed an increase in runners on the roads and trails, which is great to see!

The Couch to 5k plan does what it says on the tin. If you a total newbie to running, the cough to 5k plan is for you. Most (if not all!) of the plans will have you start to run with a combination of walk/ runs around 3 times per week.

These will gradually increase until the end of the training plan you’ll be able to run the 5k distance comfortably.

If you’re looking for a C25k training plan here are some popular ones for you: –

All you’ll need to get started with a C25k training plan is a pair of decent running shoes and the world is your oyster!

parkrun is Up and Running (literally)

The second Coronavirus-related-running news- post here for July (darn it). With parkruns out of action for months, people were quick to wonder what on earth they were going to do with their Saturday mornings.

New Zealand were the first parkruns to start back following the Coronavirus outbreak and with good reason too! The country recorded some of the lowest case numbers which meant that social gatherings could return to normal much quicker than some other parts of the world.

On Saturday 4th July parkrun New Zealand welcomed back its runners with the whole envy of the parkrun community.

To mark the event, each event adopted a different parkrun country.

Well done New Zealand, we’ll be there to join you as soon as we can! To see the full video click here

London Marathon is in the Running News (Again)

After 2019’s London Marathon controversy, it’s ended up in the news once again for a completely different reason.

(by controversy I mean the cut-off time for runners who were harassed off of the course by officials and mocked by spectators, despite the race’s organised time pacers, who were fully aware of those runners’ predicted finish times).

The London Marathon is one of the only major races who have continued to press on with their rescheduled date in October, after the race was postponed from April 26 (yep it’s Coronavirus again) and it’s left some runners wondering what the logistics will look like if the race does go ahead.

Some runners are scratching their heads as to how they’ll run the race socially distanced, which is in line with current government guidelines. Can you avoid other runners enough in a race setting to feel comfortably ‘distanced’?

Will they have to take their own water bottles, will there be any support or spectators and some after asking themselves if they want to run it under these conditions.

The London Marathon is notoriously difficult to gain entry to with some runners trying for over 10 years to gain a place via the ballot without success.

The Telegraph also reported that runners may have to wait until 2023 to join the race if they want to defer to avoid social distancing measures. Read their full article here

As if 2020 wasn’t bad enough, rumour has it that Garmin was hacked after demands of $10m to regain control of the site.

Fair enough, right. Not their fault. Except most peoples’ frustrations were the lack of response from Garmin following the alleged hack.

The main question being, was personal information still guaranteed as being safe?

Garmin finally released the below statement after days of users being unable to access and upload their running data, however, many people still had no access to their data.

If there’s one thing I’m passionate about as a female runner, it’s inspiring and being inspired by other women.

Beth Pascall set the fastest women’s time of 14 hours 34 minutes in the Bob Graham Round of the Lake District 65 mile challenge and became the fifth-fastest runner ever.

Have you taken up a Couch to 5k program since the lockdown? If you’re signed up for the London Marathon, are you tempted to defer or run it with the current social distancing guidlines they’ve set out?

If you enjoyed this post, why not check out some of the related posts below