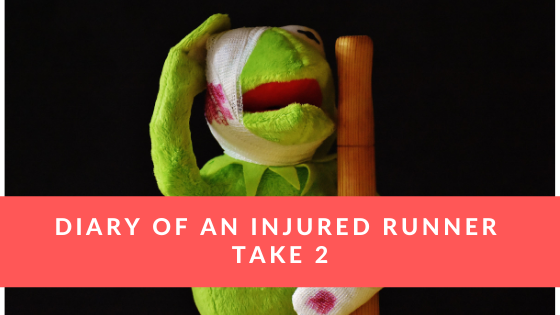 After my somewhat miracle cure for my tendonitis, I’m pleased to say I’m back to ‘normal’ and I can walk, which is the main thing!

My foot felt so good today, it’s the best day it’s been since the beginning of my injury. Clearly, my brain has decided to accept that I am actually not in any pain and I can walk fine #ThanksBrain

My first time at the gym in weeks! When I sat down on that spin bike I felt so happy I was probably smiling like a weirdo.

I decided to do my favourite Trip and it felt great! I have definitely lost fitness though as it felt super difficult but that’s ok, onwards and upwards.

After my spin stint I thought now would be a great time to test out my foot. I hopped onto the treadmill and did a little walk for around 5 minutes and then upped the speed to a slow jog pace.

Except my foot was agony from the second I started running! Sometimes, when you first start running, you get pains here and there and often they run themselves out and you can run comfortably. This is not what happened.

My plan was to run for 5 minutes and then call it quits but I was in so much pain after 1 minute I had to stop.

I was a little gutted. All that hard work and recovery and I’m not really much recovered from the injury at all.

Eugh, I was in pain today walking around but I think my footwear hasn’t helped much with this. I wore ballet pumps which slop off my foot a lot and don’t have much cushioning in the soles.

By the time I got home I was almost in a panic that my foot felt exactly as it did the day my injury surfaced so I made sure I rested for the duration of the evening.

Another bad foot day today. I had to wear some questionable footwear to work but I had to choose comfort over fashion…

Still suffering with my foot today, I’m disappointed that I’m set back and still unable to run but I will use the spin bike and swim in the meantime, there’s no way I can go through that again and potentially end up in an even worse position.

In unrelated running news, I went to a friend’s house and we had a tequila party and watched a Zac Efron film while eating pizza and snacks…. it really was a perfect evening!

I’m definitely taking this relaxing business a little too seriously and had another night in with my BFF to watch the final of The Circle.

We had circle-shaped snacks and drank a copious amount of prosecco (bubbles are round right).

I really wanted Tim to win but I was happy he’d won the viewer’s vote.

The plan for next week is to go back to the gym on Tuesday and test my foot on the spin bike as that was such a success last time and then do some strength training and swimming instead of running.

The Great South run was televised today and I watched a little bit of the beginning. I’m always fascinated that people can become such great runners without becoming injured!

Eilish McColgan was the female winner of the 10-mile race with a time of 51:36 which puts her second on the British all-time list behind Paula Radcliffe, who ran 51.11 in 2008.

She made it look so easy, she’s a total inspiration.