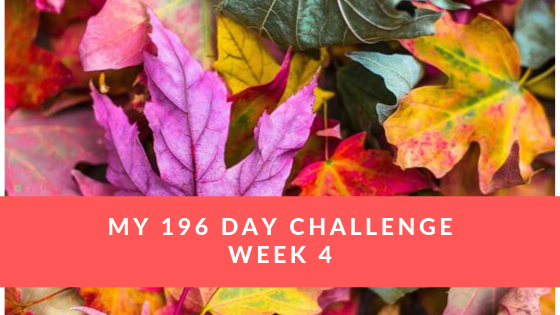 Just when my 196 day challenge was starting to heat up, disaster struck!

Monday is always my meal prep day and as we are nearing pay day, I have to be a bit more frugal with my shopping budget.

My go to meal prep meal for lunchtimes are a big salad (with tons of black olives) and some cooked chicken with a whole meal wrap.

Add some fruit as snacks and I’m good to go for the week at work.

I’ve had somewhat of a disaster today! After my run on Sunday, I had a little bit of foot pain that I’d never had before across the top of my right foot.

Yesterday it was not too bad at all, I probably wouldn’t have run on it but I went for a walk at lunchtime and apart from a little bit of pain it was bearable, I’ve definitely had worse ‘injuries’.

But this morning, I stepped out of bed a little carefully and everything seemed normal (a little bit of underfoot pain is normal for me!).

I drove to work, put on my work heels and carried about my day. The pain started to feel worse so I took off my shoe and used my tennis ball, that was my Labrador’s, under my foot and rolled it around a bit.

Except that didn’t help. In fact that made it worse! So much worse that I couldn’t even stand on it without terrible pain!

So I spent the rest of the afternoon resting it up on a crisp box and hobbling around the office any time I needed to go anywhere.

Today was supposed to be my gym day and Trip day so I was gutted that I had to skip it and head home and rest instead.

My plan B was to go for a swim but I remembered my goggles were letting in water and I needed new ones… so I had a little sulk instead.

One thing that occurred to me as I listened to each persons’ advice is, in my opinion, as a runner, putting up with injuries and niggles is par for the course.

I sustained an AirHop injury a couple of years ago and I had to hobble around the block to walk the dog for nearly two weeks!

Did I go to a doctor… no I did not. Did I assume I was going to recover… yes I did and eventually I did…

Is this the smartest plan? Probably not, but I always feel like I know when I’ve done something serious and when a few days rest will help.

With this… I couldn’t call it. By the evening it was feeling better already but I may have to bail on the gym again tomorrow which will not make me happy.

In a little more happy news, last night I discovered Our Planet on Netflix narrated in Spanish!

Let me tell you, it didn’t disappoint! The lady narrating in Spanish has such a calming voice that I put it on before bed to chill out.

I couldn’t tell you what the heck she says 90% of the time but I know a cheetah when I see one!

This morning, I hopped out of bed and totally forgot about my foot pain! When I realised I thought ‘yay I can go to the gym today’ and went about my morning.

But as the morning went on it was feeling more and more sore so I’m pretty sure this is an injury that needs rest!

By the time I got to work I was hobbling around again and had to use my makeshift footstool/ crisp box to take some pressure off.

Eugh, being injured is so damn annoying. I saw a runner out of my window and I felt the angers that I couldn’t run!

I went out for the evening for a meal and it didn’t feel too bad but by the time I got home again it was pretty sore so I’m sat here with it propped up again.

I’ve got way too much going on at the moment to be out of action so I’m hoping this clears up pretty sharpish!

At least my Spanish is going well… except Duolingo seemed to be down and it wasn’t recording my points or that I’d maintained my streak! Didn’t have much time today, only half an hour, but every little helps

Oh dear, please don’t tell me I have to bring back ‘The Diary of an Injured Runner’ because I just can’t!

Woke up this morning and my foot was in pain straight away so I called the doctor as soon as they opened and managed to get an appointment half an hour later! Result!

She said I needed to go to the minor injuries clinic and have an X-ray as it could be a hairline fracture! Not such a result.

Luckily, driving isn’t too painful so I drove the 15 mins, struggled to find a parking space and then hobbled into the clinic.

I was greeted by a very rude lady who snapped at me and asked if I had been referred by my GP to which I replied that yes I had just come from there.

She then looked at me, as if I was lying, and said ‘well the X-ray machine is broken you’ll have to try tomorrow’.

So I called the doctor and asked what I should do and they advised that I could try another clinic which was half an hour away… I debated whether it was worth me trying to drive all that way or whether to wait until tomorrow.

I decided it wasn’t. I’d hobbled around on it enough already and it was feeling sore.

Not a great start! Dr Google said that hairline fractures are healed by RICE so… I suppose that’s what I’m going to try… it does feel better following rest so it feels like the best course of action until I’ve been told otherwise.

While at the doctor’s, she told me not to run on it (I mean I can’t even walk so definitely not going to even attempt it) but she then followed it up with another ‘don’t run on it’.

This made me chuckle… ah you know runners… terrible at listening to advice when it comes to injuries!

I know myself and that I’d only be at the doctors if I felt like it was pretty serious so I’m taking her advice for sure.

Later in the evening, mum was over so I took a gamble and gave the clinic a call to see if the X-ray machine was working now and it was! So we drove over there and I finally got my X-ray done… hooray!

This is getting boring now, my foot is still super sore but being the stubborn sort of person I am, I’m now determined to just keep living my best life!

It was my work’s summer BBQ and I really didn’t want my foot to stop me doing things that I want to do so I hobbled around all evening and tried to be sociable while standing on one foot, channelling my inner flamingo!!

After 2 tequilas it was feeling pretty great but I did pay for it when I got home and got in bed, it did NOT feel good.

I’ve come to the decision that until the doctor tells me otherwise, I’m going to try and get about and do as much as I can.

Considering how much I hobbled around last night and how sore it was when I got into bed, my foot wasn’t too bad when I got up (just a normal amount of pain)!

I had to get my act together because I was going out again tonight but I knew I’d be sat down a lot.

The weather was awful and pouring with rain so it wasn’t a bad thing that we went to the Red Light for some pretentious cocktails and then hobbled into the centre and stayed in one of the bars there the rest of the night.

It was really busy when we first got there and I was so worried someone was going to push me over or stand on my foot! I’ve never gone out out in flat shoes and I’m pretty short so I felt a little intimidated.

My friend managed to gatecrash what looked to be a date and asked them if I could perch on the end of their seat, which I did and when they left that was where we stayed.

In the warm and dry, drinking fancy cocktails watching the rain come down outside.

I’m determined not to let this put a dampener on my challenge! I have a deadline for a reason but it’s going to be more difficult…. if I can’t get to the gym or do any sort of exercise that’s going to put me back a bit BUT that just means I can spend more time working on my ‘sitting down’ tasks!