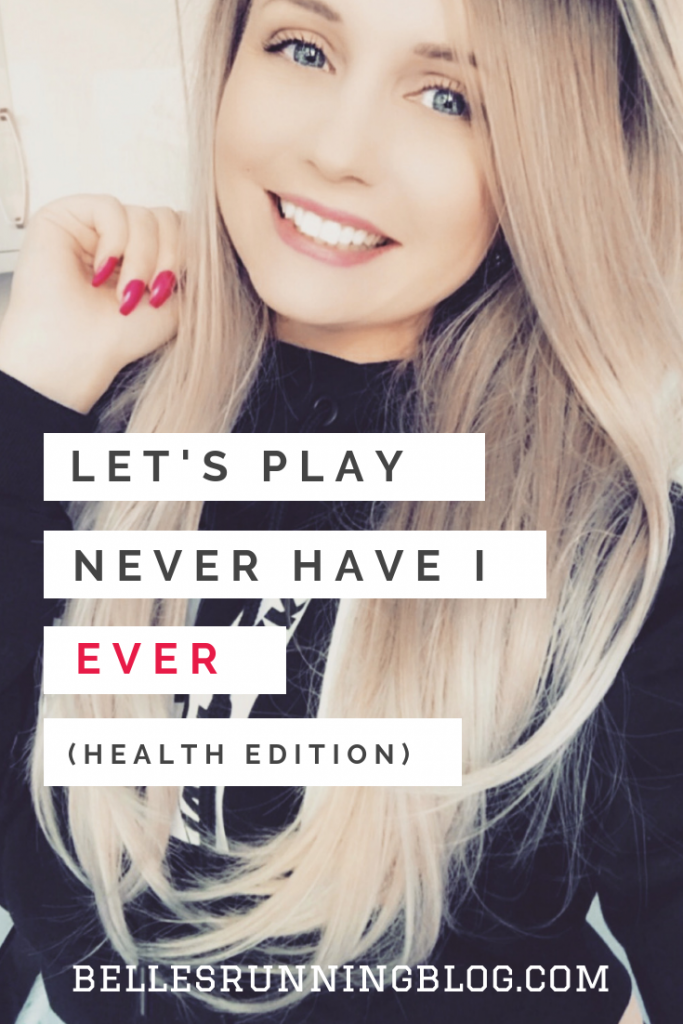 If you’re a regular around these parts, you’ll know that my Sunday posts are usually a roundup of the week in terms of what I’ve run.

However, this week I haven’t run at all. Not once. Not even a cursory run or a trot around the block.

So instead, I thought it might be fun to play a drinking game, Never Have I Ever, for you to get to know me a little better.

As this is a health and fitness blog, I would suggest that instead of taking a shot of an alcoholic beverage if you have done the thing I’m about to put forth, you take a wheat grass shot or perhaps a chug of your smoothie.

Rules: If you have done any of the things from the list below, take a shot!

Never Have I Ever… Been intimidated enough to leave a library

If you’re reading this and you know me in real life, I’m sorry I know I haven’t shut up about this!

Me: goes to the library to get some serious work done. Plan is to stay until the library closes at 7.30pm

Reality: 3 middle-aged men turn up at the library around an hour after I’ve arrived. I’m hard at work and managing to get through my to-do list.

When one of them arrives he exclaims “Management in today then”. I can only imagine he was referring to me as there was not another soul in the library at the time. I was dressed in my work clothes so perhaps I looked like ‘management’ (there’s a first time for everything).

Another of the men says “we’re going to have to be careful what we say today lads”. Again, assuming they’re referring to me being sat there as there is no-one else around.

They then proceeded to have, what I would determine, inappropriate-for-a-library-conversations for the entire time I was sat there. I finally had enough and packed my stuff up and left.

Being ever the problem solver when I shared my dilemma, my work BFF suggested I work from Starbucks instead. What a brilliant idea!

So I headed off to Starbucks and spent a small fortune #SorryNotSorry on a 4 cheese toastie, a berry hot chocolate and a mango ice tea lemonade (all delicious, would highly recommend).

After awkwardly trying to work there for an hour, I decided it was probably best if I headed back to the library because it was likely if I didn’t, I wouldn’t ever return.

I can’t help but feel very indignant about this situation. Call me sensitive but I was very upset with myself that I allowed some grown men to intimidate me enough to make me leave when I had every right to be there just as much as they did.

I couldn’t shake the feeling that if I were a male in the same situation, they perhaps wouldn’t have made any comments at all to me being there.

And why would my being there have any bearing on the types of conversations they felt they could and couldn’t have (incidentally they continued to have them anyway).

A library is a public place where there are people from all walks of life and all ages. However, I felt like I had sat down to a table of guys in a pub.

Yes, I’m still mad about it. Yes, I’m going to keep going on about it. Yes, I feel that this was somehow done intentionally to make me feel uncomfortable. Yes, I feel like females have to go through this sort of thing way more than they should. I was embarrassed, and am.

Yes! I too have been intimidated in a library: take one shot (healthy, not alcoholic). I’m also going to need some details in the comments below to make me not feel quite so alone in this…

Never Have I Ever… Accidentally dropped my phone in the bath

I spend way too much time in the bath. For some reason I always think that I’ll get much more done if I take a bath rather than shower because I can do two things at the same time… I can’t.

I’ll take all of my work in there, magazines, colouring books and pencils, my laptop to watch Netflix, my notepad in case I’m suddenly struck by inspiration. And I never do any of it.

Today was one of those days though where I was triple-multi-tasking. Bathing, reading a book on social media marketing (picked up at the library I’ll add, don’t get me started again) and trying to take photos of the pages that were of interest to me.

I left my phone on the side of the bath for a minute and it slipped right off into the water! Panic! Oh no, it’s gone right underneath me, it’s getting more wet!

I scooped it out and put it on the side… thank Apple for manufacturing the waterproof iPhone 7 plus. I’ve never tested it before, it works.

Yep, I’m always dropping my phone in the bath: have a nice shot of peppermint tea.

Never Have I Ever… Had vegan ice cream

I’ve lost some of you now haven’t I. I’m not a vegan preacher or a Twitter harasser when it comes to everyone becoming vegan. I’m just trying best to save some pigs and cows – but that’s for another time!

I was perusing my little Tesco for something nice to eat that I probably shouldn’t (yeah, it’s a healthy blog but I’m human too) and my eyes happened upon some Magnum Vegan ice creams.

When I tell you what I’m about to tell you, you may wish to disown me. I don’t like ice cream! What the…. it’s too cold and it’s too sweet and just… give me cake instead.

So I was kinda hoping they didn’t taste too much like ice cream anyway be honest! Actually, they do taste like ice cream but they’ve got a much creamier smoother taste and I enjoyed them a lot.

Yes, I’ve had vegan ice cream too and no cows were harmed in the making of them: take an apple cider vinegar shot.

How many shots did you take? Please tell me no more than 2 because I’m really hoping there aren’t a plethora of library-harassers out there that we never knew about!

Related Post: What happened to my mental health when I ran every day

Hope you’ve all had a great week and I’ll look forward to playing the next edition of Never Have I Ever with you all.