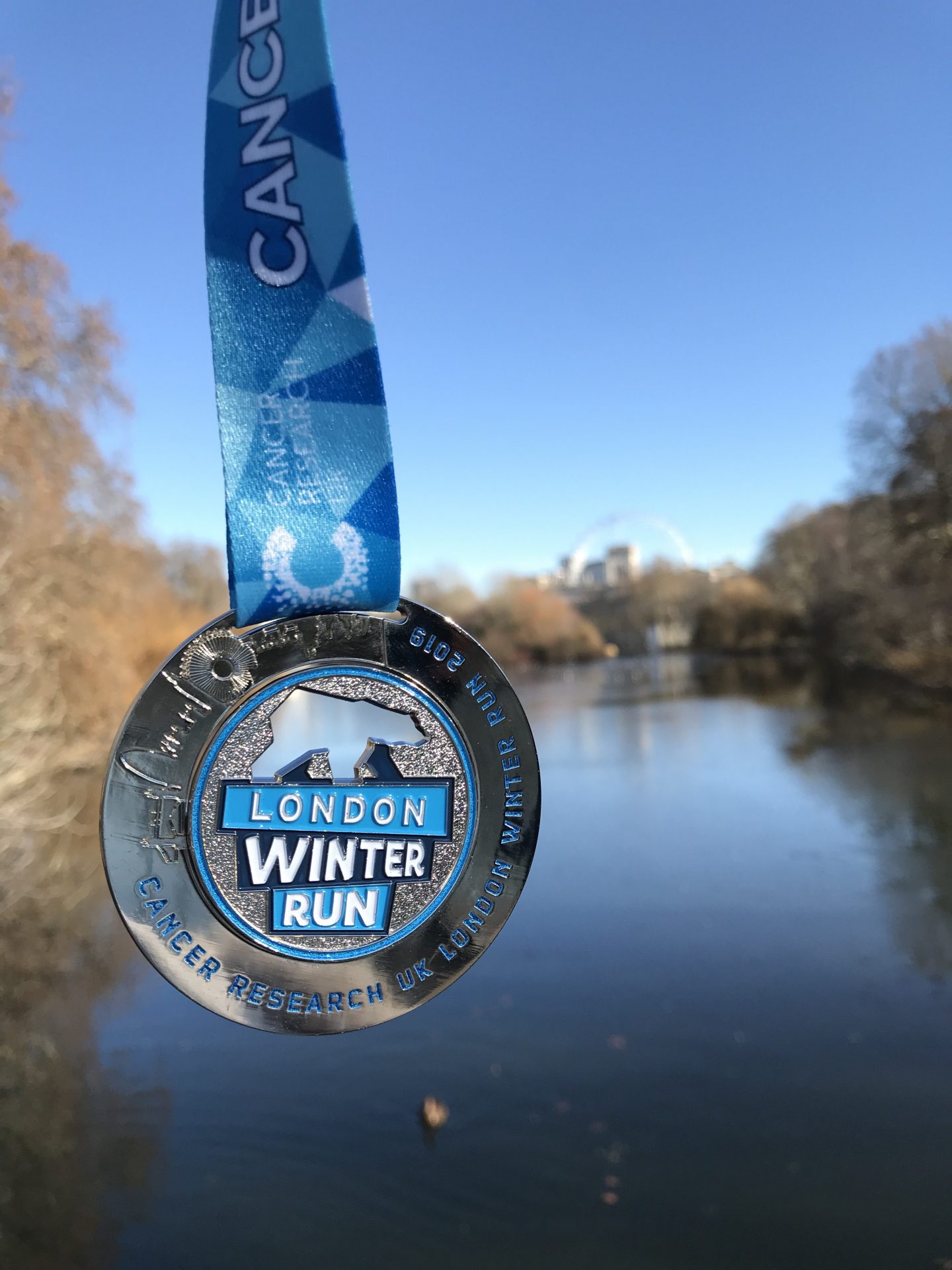 Snow! Why is there always snow when I have to travel somewhere?? The South West of England was hit with the first snow of 2019 on the Thursday night before the race and I was concerned we weren’t going to be able to travel to London via two busses on the Saturday morning.

After an early start to catch the 10am bus, we skidded and skated across the frozen pavements the half a mile walk to the bus stop. Only to find we’d looked at the wrong day for the bus times and had to wait a little longer than we’d planned.

We made the journey into Bristol City Centre to catch the Megabus (very cheap way of travelling into London compared to the trains) and stopped off for a little bit of breakfast while we waited.

The bus journey was pretty uneventful except for the fact that it was ABSOLUTELY FREEZING for the entire 3 hours. We both had our coats over us and were trying to hide underneath them to get warm… it didn’t work. At least the sun was shining though and it was really pretty sitting at the front of the bus looking out at all of the snowfall across the countryside. That was until the window steamed up and we couldn’t see a thing.

Anyway, enough about boring bus journeys! We stomped into London around 3pm and had around a half an hour walk, past the Queen’s house, to get to Trafalgar Square. We checked into our hotel and went to explore outside for a bit. The wind was bitterly cold and there was nowhere really to escape the freezing temperatures so we stopped off and got a (very expensive) mulled wine for our meander. We walked around the London Eye, past Big Ben and the Houses of Parliament and arrived back to Trafalgar Square for dinner with the BFF!

We left dinner pretty early so we could all get an early night for tomorrow’s race but I’d forgotten my pyjamas and because I was so cold and couldn’t warm up I ended up getting in bed and falling asleep with my clothes on (jeans and a jumper) which isn’t ideal night time attire!

I woke up around 4am and couldn’t get back to sleep so I wasn’t feeling very enthusiastic or energetic for the 6 ish miles ahead! Regardless, I jumped into my unicorn leggings, threw on my race number and added my gloves and hat to my race belt just in case it really was that cold out.

We took a leisurely walk from the hotel to the start (we could see the start from our hotel that’s how close we were) and they called out for my wave to make their way to the start line. That was quick! I chomped down a banana quickly as I hadn’t eaten anything yet hoping that it might give me just a little bit of energy to get around the course.

The atmosphere was great and as I was walking up to the start line there was music and cheering and warm ups. The sky was as clear and as blue as it could be and it made for an even nicer atmosphere (even if it was super cold). We set off, apparently in the wave before mine, there were people with all sorts of wave numbers going off at the same time but it wasn’t overcrowded with people.

The London Winter 10k is a pretty much flat course (which always makes me happy) and they had huskies giving high fives, penguins giving free cuddles and choir singers!

Right from the off I was struggling. I’d set my watch for 59 minutes and my plan was to stick to it as best as I could but if I couldn’t it wasn’t the end of the world. I hadn’t run a 10k distance for 4 months so I definitely wasn’t in the best shape for trying to get a PB but I was at least hoping for under the hour.

It didn’t take long for my watch to let me know I was 17 seconds behind and while I did catch up a couple of times I eventually ran out of steam and 17 seconds turned into a minute, then two, then two and a half. I was pretty disappointed that I’d lost my race pace but I physically couldn’t have given any more. I kept telling myself that I might never get to run in London again and did have a couple of spurts of energy but I just couldn’t keep up and ended up crossing the finish in 1:02:34.

While it’s unusual for me to talk to strangers, especially those dressed as animals, I did ask one of the volunteers on the finish line if I could take a selfie with them. I had to put down my Soreen, water, coconut water and protein ball first though, perhaps a goodie bag would have worked out better!

Once the race was over, we headed back to the hotel to check out by midday and luckily I had enough time to have a shower and warm up a bit (I’ve never not wanted to get out of a shower that much before).

We met up with the BFF again and took a couple of selfies and then made our way with a slow walk back to the bus station. We walked through Saint James’s Park which was so pretty with all of the birds and the lake with the London Eye in the background, and back to the Queen’s house again. Obviously, it would have been rude of me not to take pictures in front of all of the London landmarks that we passed!

We finally made it back to the bus stop (after getting a little bit lost) and we were super cold by now. We then had to wait for around 2 hours for the bus to arrive as it was delayed. Because we’d been waiting for so long, and sat down, a huge queue had formed for the bus and by the time it had come we ended up right at the back of the line. That meant we couldn’t sit next to each other for the journey home, which wouldn’t have been so bad except I ended up at the front of the bus again in the freezing cold, I also was sat next to a lady who had no ‘cold etiquette’ and was sniffing up her drippy nose every few seconds and then proceeded to spend the entire 3 hours elbowing me, turning the lights on and generally being a nuisance.

To drown out the ‘drippy nose sniff’ for the duration of the journey, I’d put in my headphones and listened to Derren Brown’s Happy on Audible. His soothing voice made me feel much better about the cramp in my shoulder that I couldn’t get rid of, my cold aching bones and the niggling feeling that I 100% was going to catch a cold from the lady next to me. I kept telling myself that this was only temporary and I wasn’t going to feel this horrible forever…

Our plan was to get back on the bus from town back home but after that uncomfortable journey we decided to treat ourselves to an Uber ride home. So I called the Uber on my phone and it was 2 minutes away, hoorayyyyy! Except he then messaged me shortly after to say he had arrived. He definitely hadn’t arrived! There was no other car around to be seen. He then called me and asked where I was. ‘Right outside of Blacks where the busses stop’ I said. ‘Ok, no problem’ he replied ‘I’ll need to turn back around’. So I watched on the app as he drove around the round about back towards our destination… and then drove right past us for the second time. I tried to cancel the journey but now they charge you so I couldn’t!

When he finally got to us he exclaimed ‘did you cross over the road!’. In my mind I was thinking ‘yes, we crossed 6 lanes of traffic across a busy intersection with no crossing and a barrier in the middle’. ‘Nope’, I said ‘we literally got off the bus right here and have been waiting here ever since’. I was absolutely incensed to learn that I had been charged 3 minutes waiting time!

By the time we got home I was grumpy, exhausted and in dire need of something to eat as the hot dog I ate in Saint James’s Park 6 hours earlier just wasn’t going to cut it.

Note to self: if I run this race again, please stay an extra night!

I hope you enjoyed this race weekend post (of mostly me complaining about my Uber driver) and hopefully see some of you there next year.