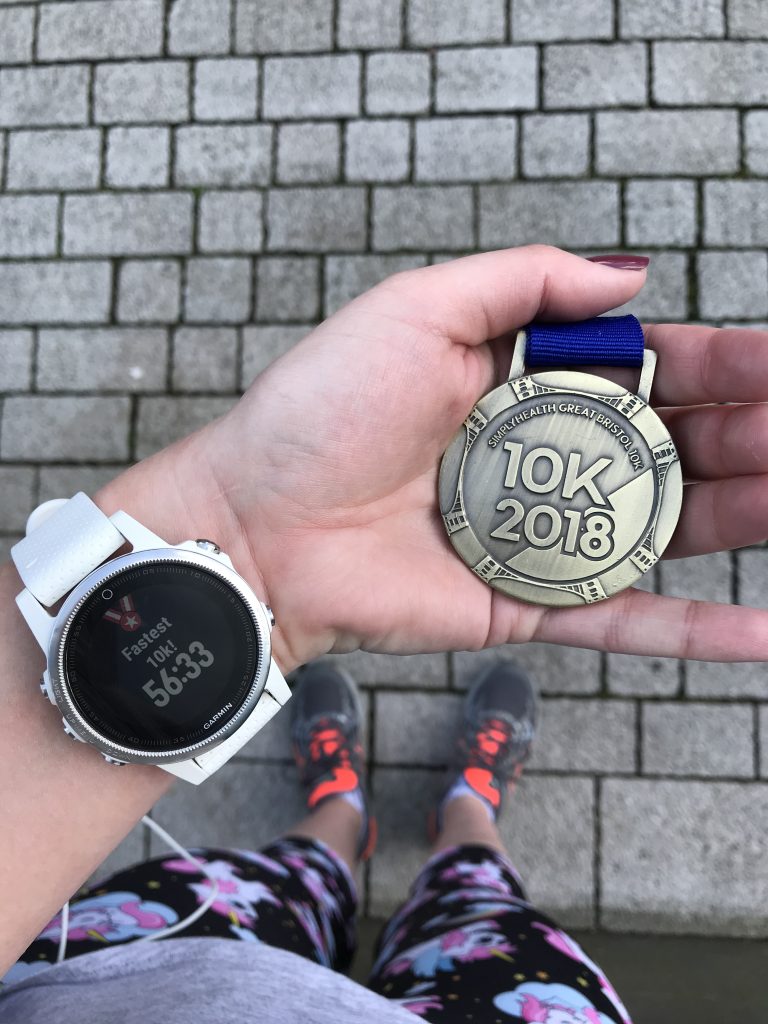 Hey everyone! If you’ve been reading my need for speed journey, you’ll have noticed that I didn’t actually post this back in May (which is when the race was) because it’s been in my draft posts this whole time! And I have a lot to say about this race so I’ve got no idea why I didn’t post it. Anyway… let’s jump back in time and relive the final week of the race that started it all.

Clearly I was going to take a rest day today after running races on Saturday and Sunday last week! And rest day I had!! I had real trouble sleeping on Sunday night (perhaps from all of the excitement) and didn’t get to sleep until pretty late. Thankfully it is a bank holiday so I was able to have a nice lie in (ignoring the fact I was awake and up at 6am feeding the animals).

I spent a bit of time watching some YouTube videos about ‘maintaining’ your body during rest days and it inspired me to try some stick rolling. According to The Run Experience, you should be doing something every day to help combat injuries and I’m terrible at actually doing this. I spent most of my time rolling my hips because that’s where it felt particularly bad but I am hoping it’s going to help most with my shin splint pain. 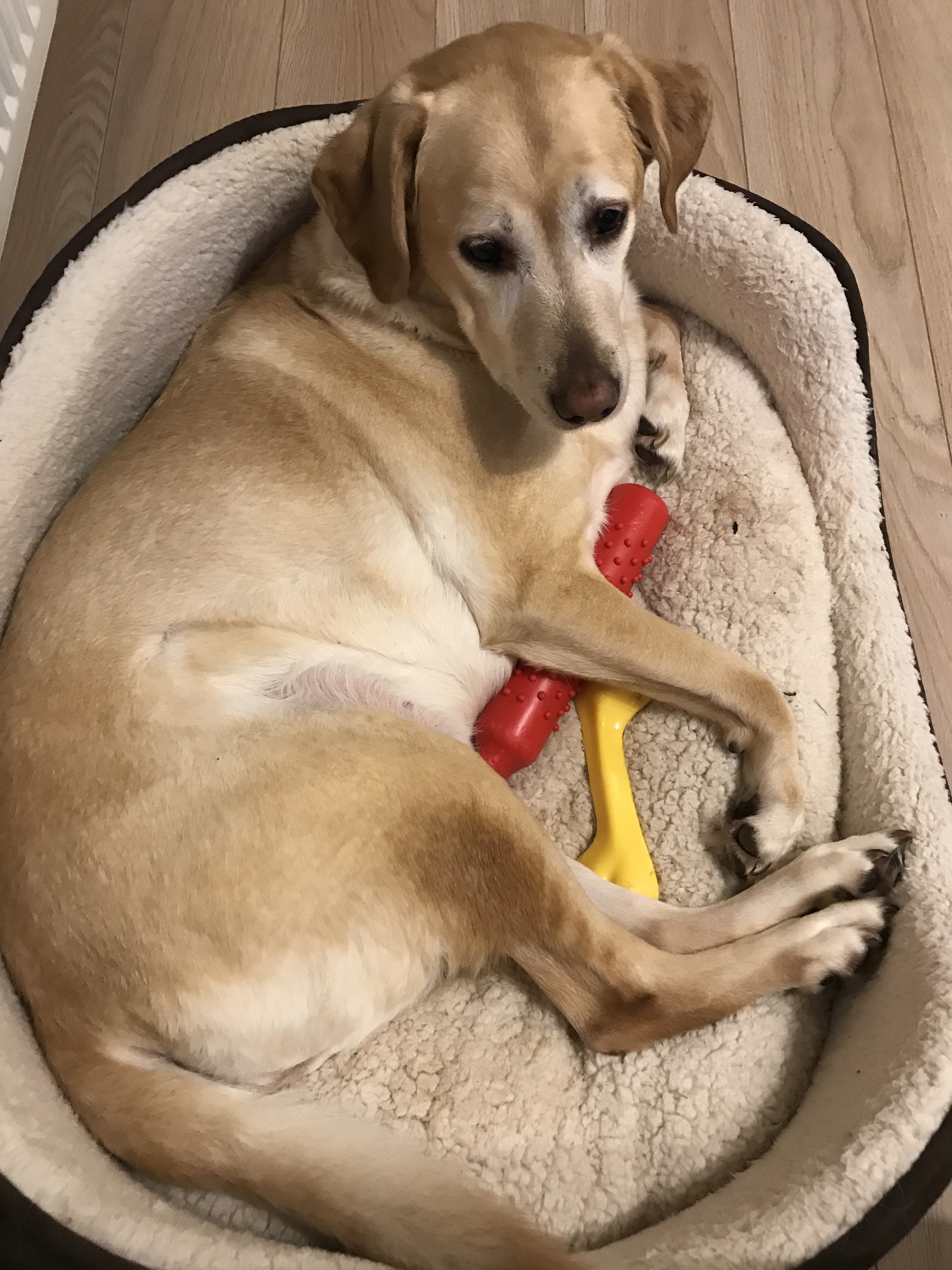 Saturday…. you can see where this is going
I kind of gave myself the week off, mostly because I’m really worried about aggravating my shins and I really didn’t want to make things worse with the big race tomorrow. Getting injured is just the worst and I’m so jealous of anyone that manages to get away injury free. On my running Instagram I’m following many other runners and some of them are just running crazy distances consistently without injury, but there are probably 5 times more people suffering serious injuries that have put them out of action and that really scares me. This is always a problem when you sign up for so many races, if you get seriously injured, you obviously shouldn’t run and I sign up for A LOT of races!

One reason I bought my spin bike for home was that, depending upon what kind of injury I’d had, I could still get some pretty decent cardio in but with less impact. I did find that when I was suffering from plantar fasciitis, this still aggravated my foot, the pedals are pretty sturdy and it didn’t like being in that position, but luckily I’ve not been suffering quite as bad this year.

Sunday | Race Day!
Waaaaaa, the day is finally here. Do I feel like I’ve done enough work to beat last year’s time? No, I do not. Was that all my fault? No, you’ve been suffering through some injuries but perhaps could have tried a bit harder… There’s nothing that makes me hecking mad with myself as much as knowing I could have tried harder. But anyway! 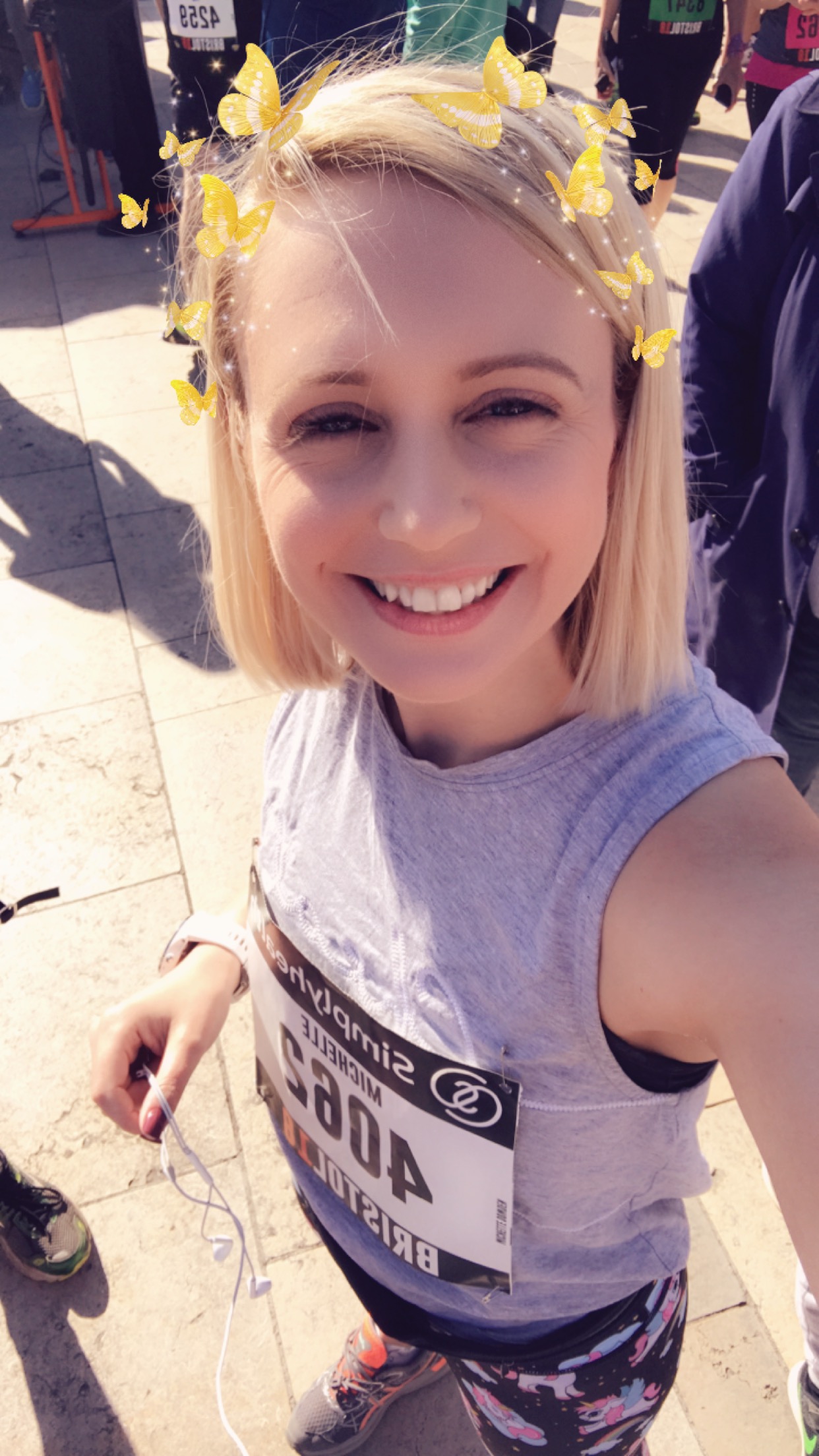 Woke up to a dry and sunny morning but it wasn’t too hot so I was hoping that the early start was going to make sure we were home and dry before it got scorching. I’d rather run all day long in the rain and cold weather than the heat, I’m just terrible at it!

One criticism I have of big races like this are the crowds. I’m used to doing races with around 300-500 people but this is literally thousands of people running and around the course. This means that instead of having one ‘3-2-1-GO’ you get several and it takes FOREVER to even get up to the start line. I was in the white wave this year and I think it was the green wave behind us, because there are so many people in the pens all of the groups get jumbled into one and by the time we set off (at least half an hour after the warm up!) I was starting with mostly green people. I thought ‘this is no problem, once we set off I’ll be able to overtake anyone that might be slower because the roads are pretty wide’. Well I was wrong about that! I think for the first mile I was struggling to get around slower runners, my pace was all over the place because I was trying to compensate for my slower start, it was just a bit of a disaster! 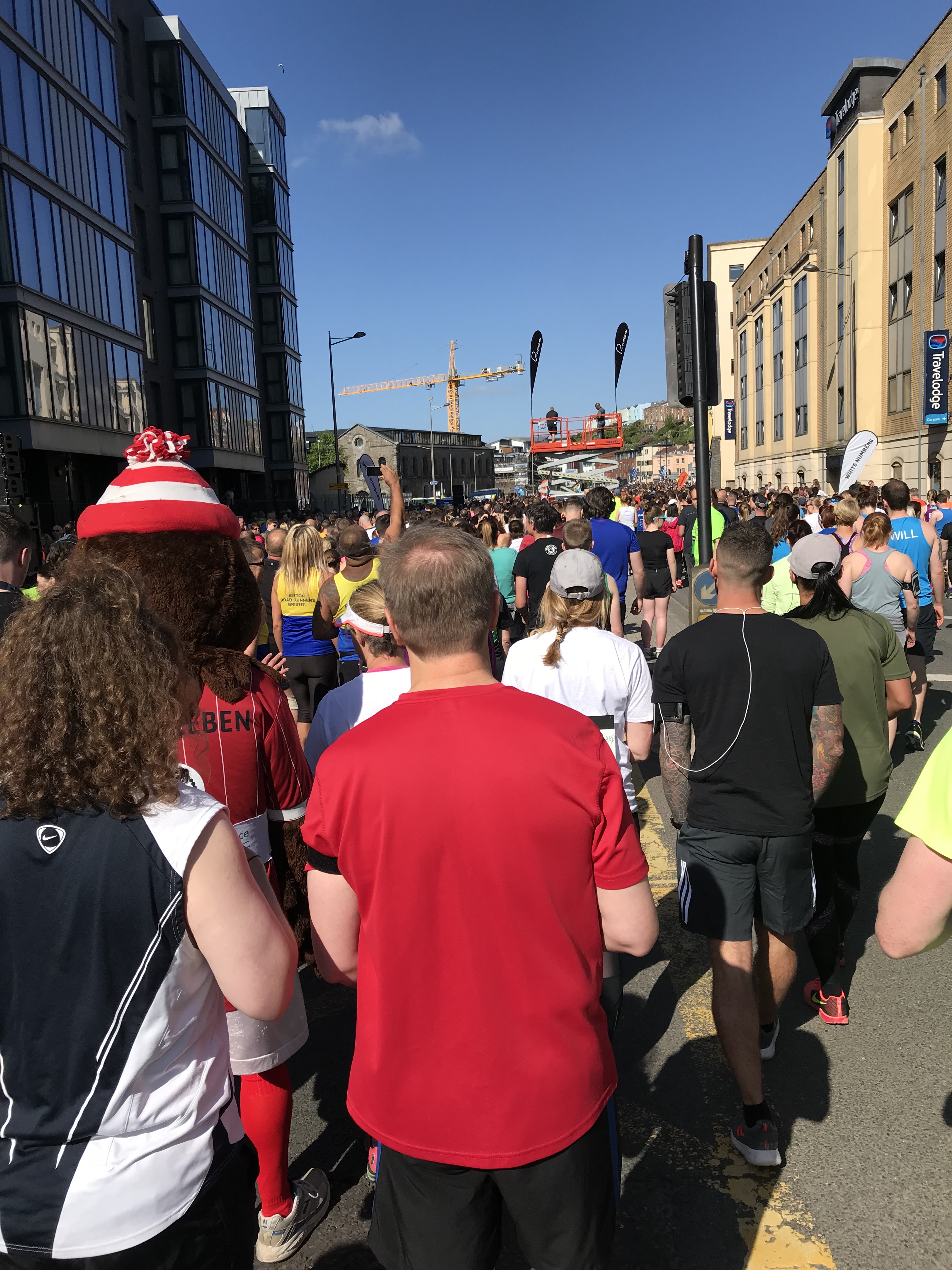 Also, I had another mishap with my watch. Because it took so long to get past the start, it sort of happened all of a sudden and I hadn’t set my watch up as I didn’t realise we were setting off. That meant I pressed start on my pacer a good time after we actually set off and that was the one thing I was counting on to help me achieve my 55 minute dream (I don’t know if I’ve already mentioned, my 2017 time was 58:19 which was my PB for that year, so I wasn’t looking to take too much off but my race times so far this year haven’t been close to that). 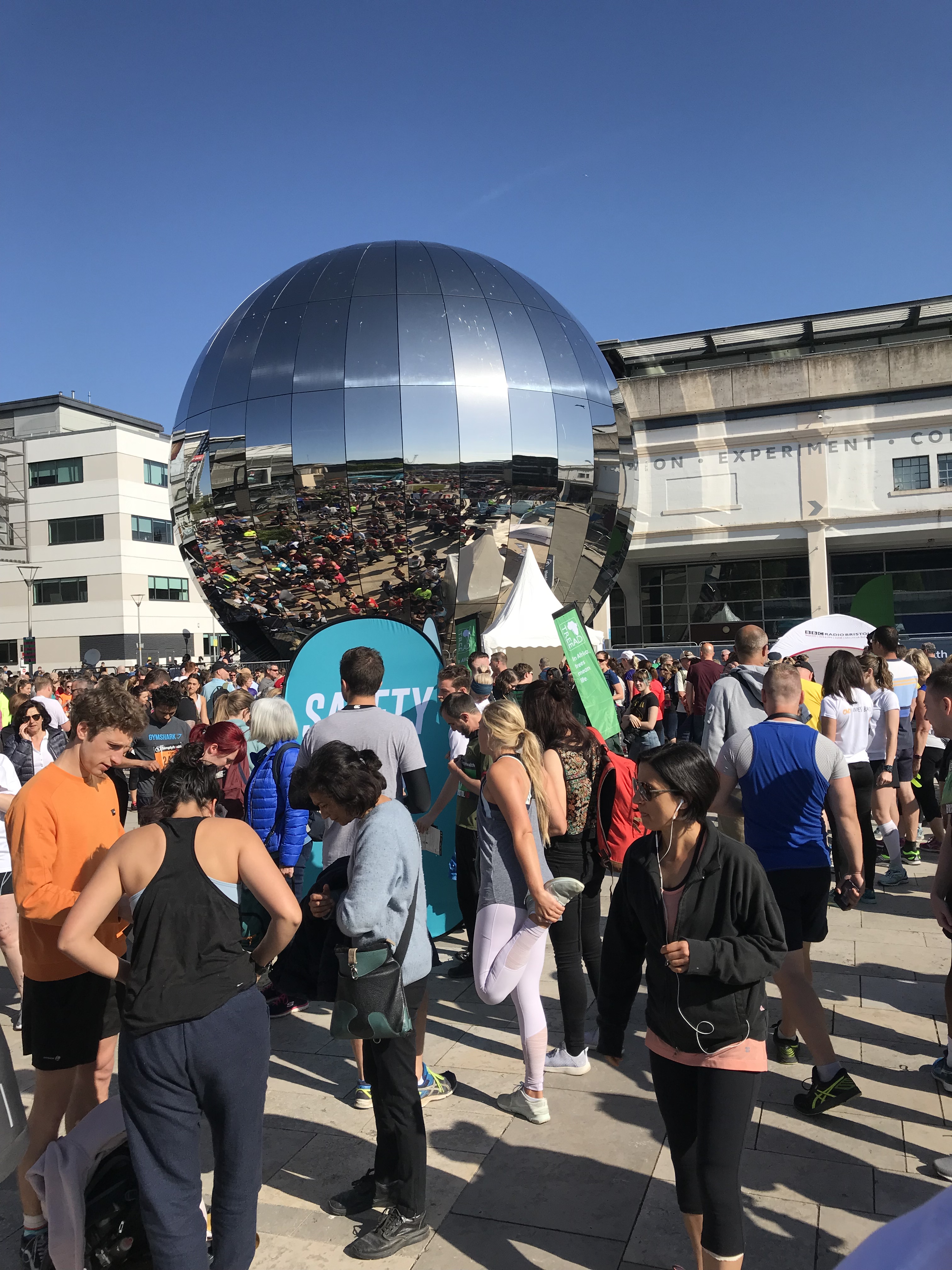 Once I managed to settle into a pace I felt a bit better but I was definitely struggling. It was getting pretty hot and I found myself walking for a couple of seconds at water stations just to compose myself a little and get my head back in it. I love watching The Run Experience on YouTube and I’ve watched most of their videos, one piece of advice they gave for a 10k is don’t stop at water stations. The race isn’t long enough for you to give yourself much benefit during the race and you’re ticking off major time by stopping, however, while I didn’t drink much at the water station, I did pour some water over me instead.

So, all of that aside, I finally found myself staring down the road towards the finish line. (Another thing I hate is long finish lines – Dublin Half Marathon…. just wow). I looked down at my watch and I was at 54/55mins ish and I thought I really need to push at this last bit, I’d be gutted if I took a leisurely pace and it ended up I could have got 55 mins! This was quite possibly the worst part of the entire race for me. There were so. many. people on that final stretch. Some people were walking at this point (probably because the waves were so jumbled up) but mostly people seemed to be out for a leisurely stroll toward the finish line and it gets narrow here as you go past the centre towards At Bristol. The frustration of trying to have some sort of sprint finish while having to try and weave in and out of so many people was enough to make me feel the angers. I love the Bristol races but I’m not so sure I’ll be doing this one again next year, I just find it all a bit too stressful! Does anyone else find this? 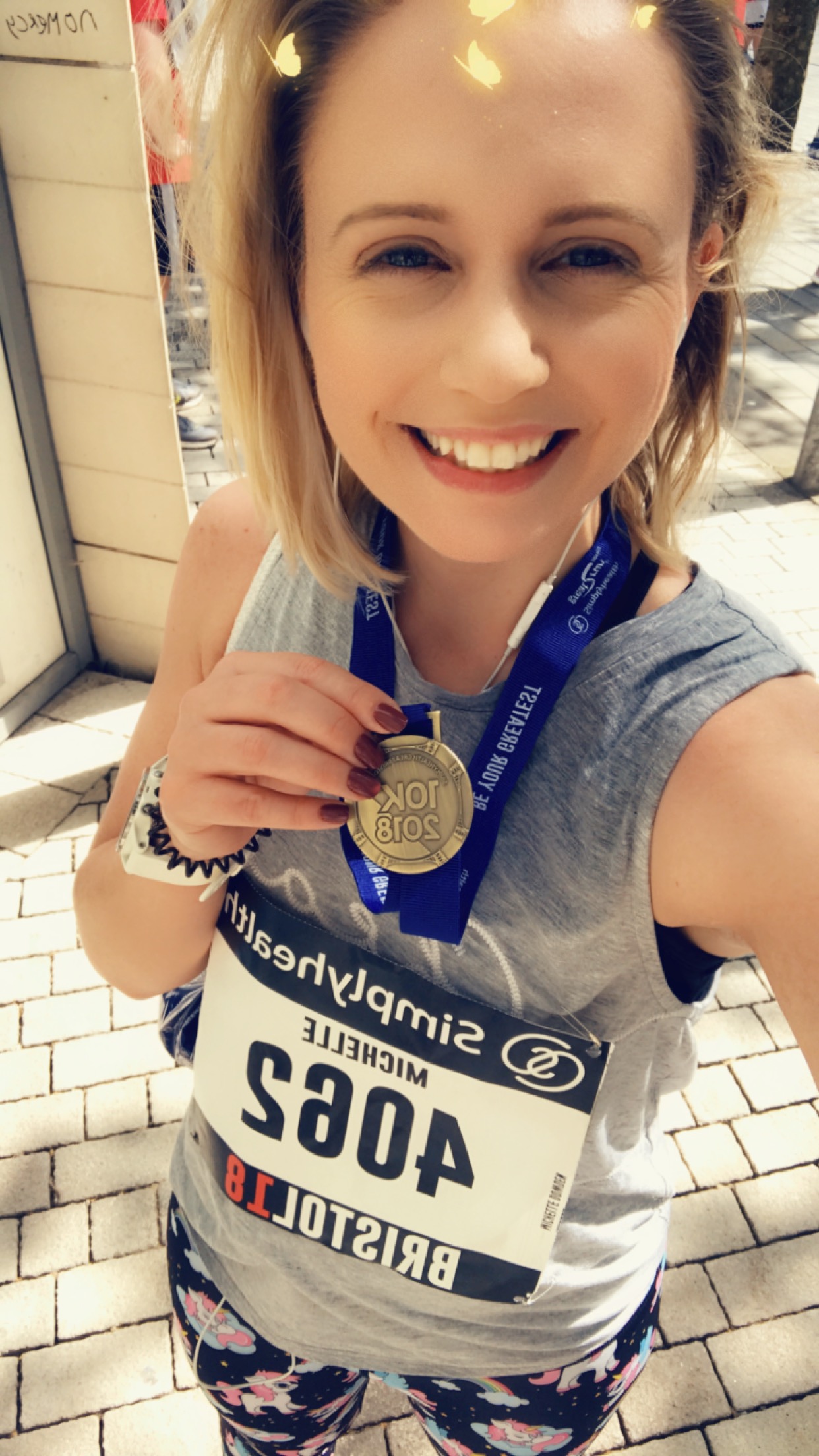 Pushing the stop button on my Garmin was both a relief and a disappointment. My watch time said 56:33 (which I knew wasn’t right due to my failure to press start crossing the start line) and I was gutted. While this was a PB for me by just over 2 minutes, I couldn’t help but kick myself for walking those couple of times and generally having a grumpy run because of all of the people. 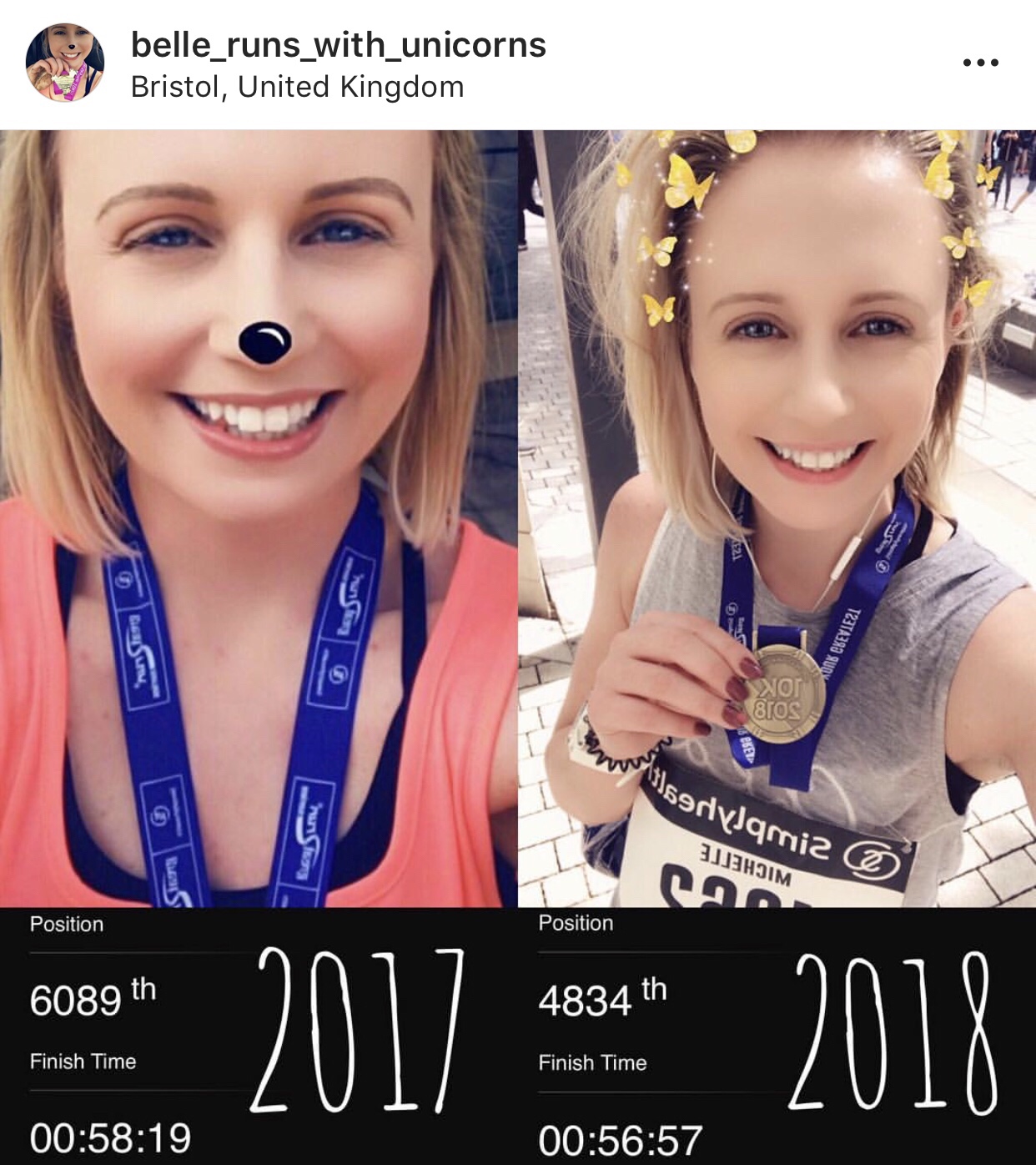 My official time was 56:57 so I barely managed a 56 min race let alone getting close to the 55 mins I was after. I know that I’ll get there though but it definitely won’t be at a big race like this one. I longed for for the smaller races of Glastonbury and the Clock Change Challenge, which do have their own downsides, but not being able to push yourself to your ability because of crowds just isn’t what I’m looking for in a race. It’s funny though because I don’t recall it being like this last year. Were there more runners? Was I just unlucky in my race wave? 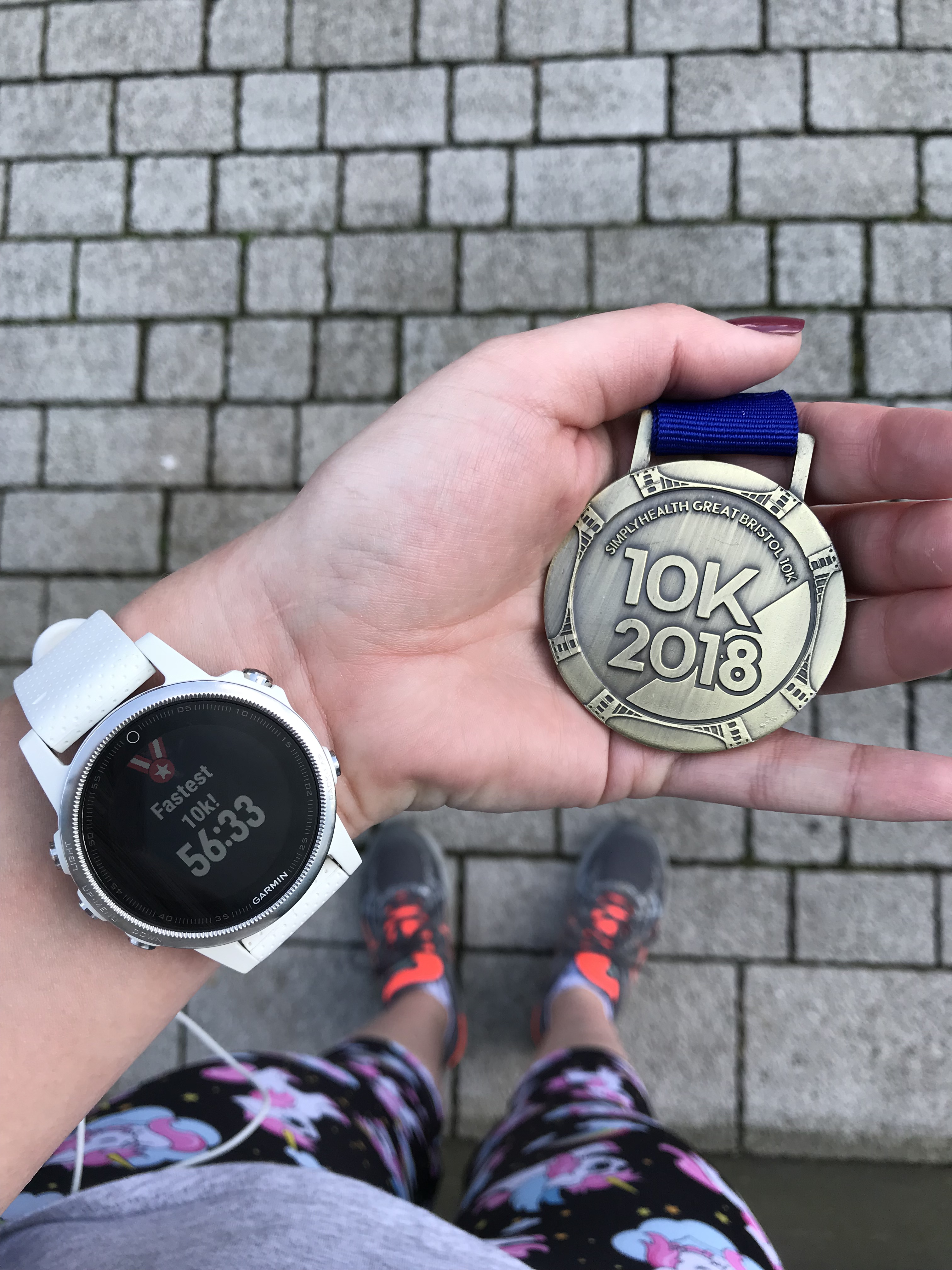 While I didn’t get the time I was going for, I have changed my whole mindset when it comes to racing. For some silly reason I was never pushing myself because I was worried I’d burn out and running races for me isn’t all about PBs, it’s sometimes about going to new and exciting places and getting to see them and explore them. Finding my Garmin pacer though has changed the game for me and I can’t imagine running a race now without it. It gives me the reassurance that I can slow down if necessary or that I need to push myself a bit more whereas before it was just sheer guesswork especially on that final mile.

I’ve got so many more exciting races coming up this year and I know I’m going to achieve that 55 minute PB and who knows, perhaps I’ll be looking to a 50 minute PB this time next year!

Did you race the Bristol 10k this year? I really would like to hear from other runners who have done it and your personal experiences with this race. 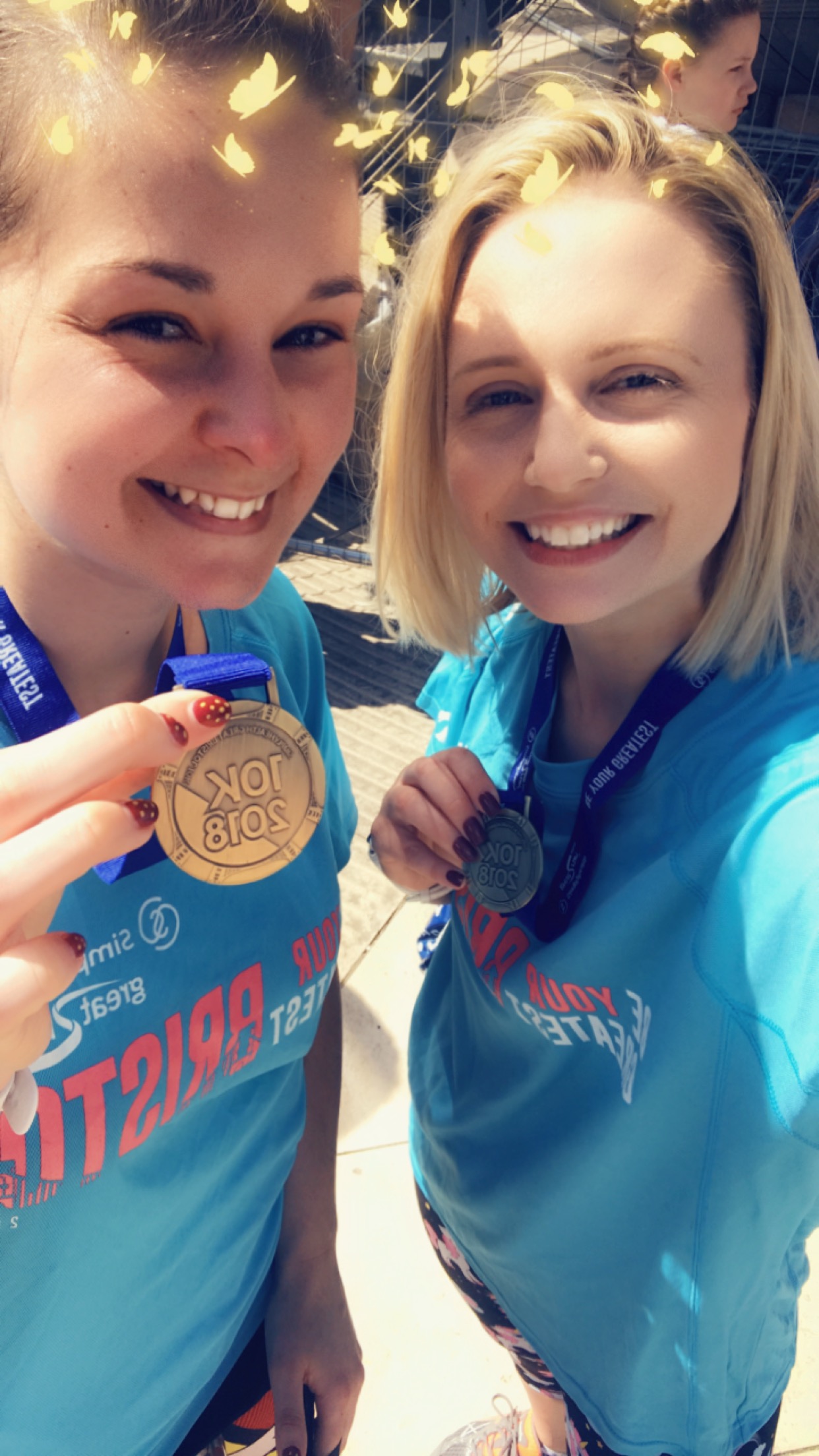