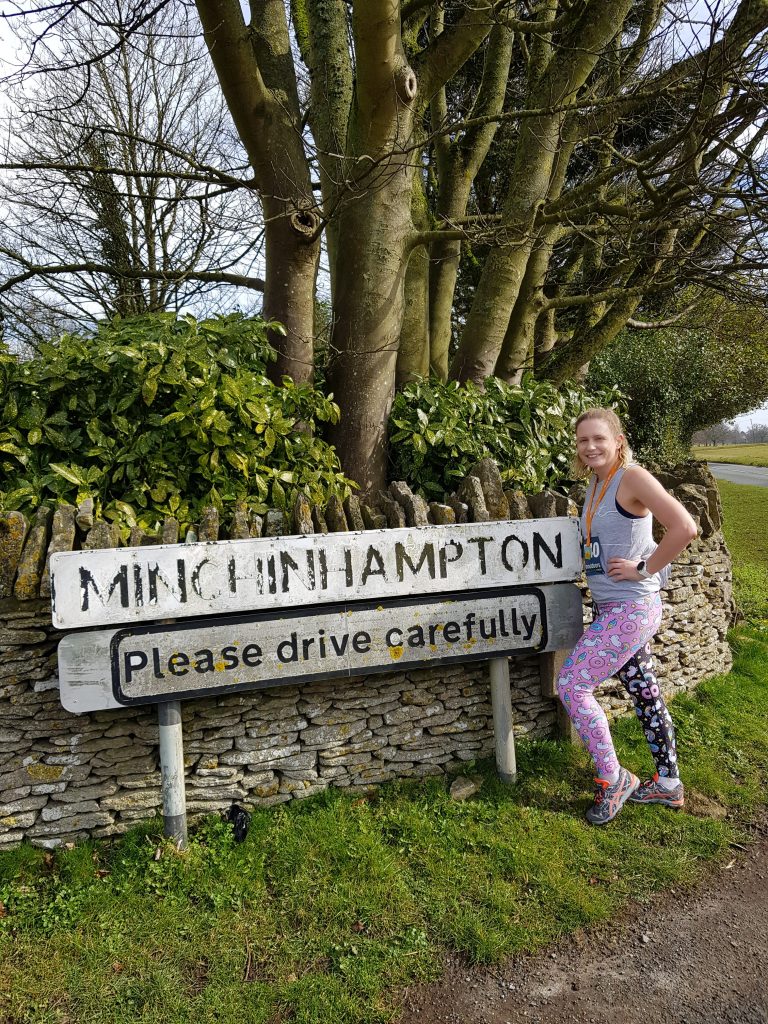 So the snow has melted and we’ve gone back to ‘normal’, however, I’ve been in a little bit of a grump that I couldn’t get out of this week. I was over tired and just didn’t have any motivation to do anything let alone run but it did pick up towards the end of the week and it ended with a 10k race hoorayyy! 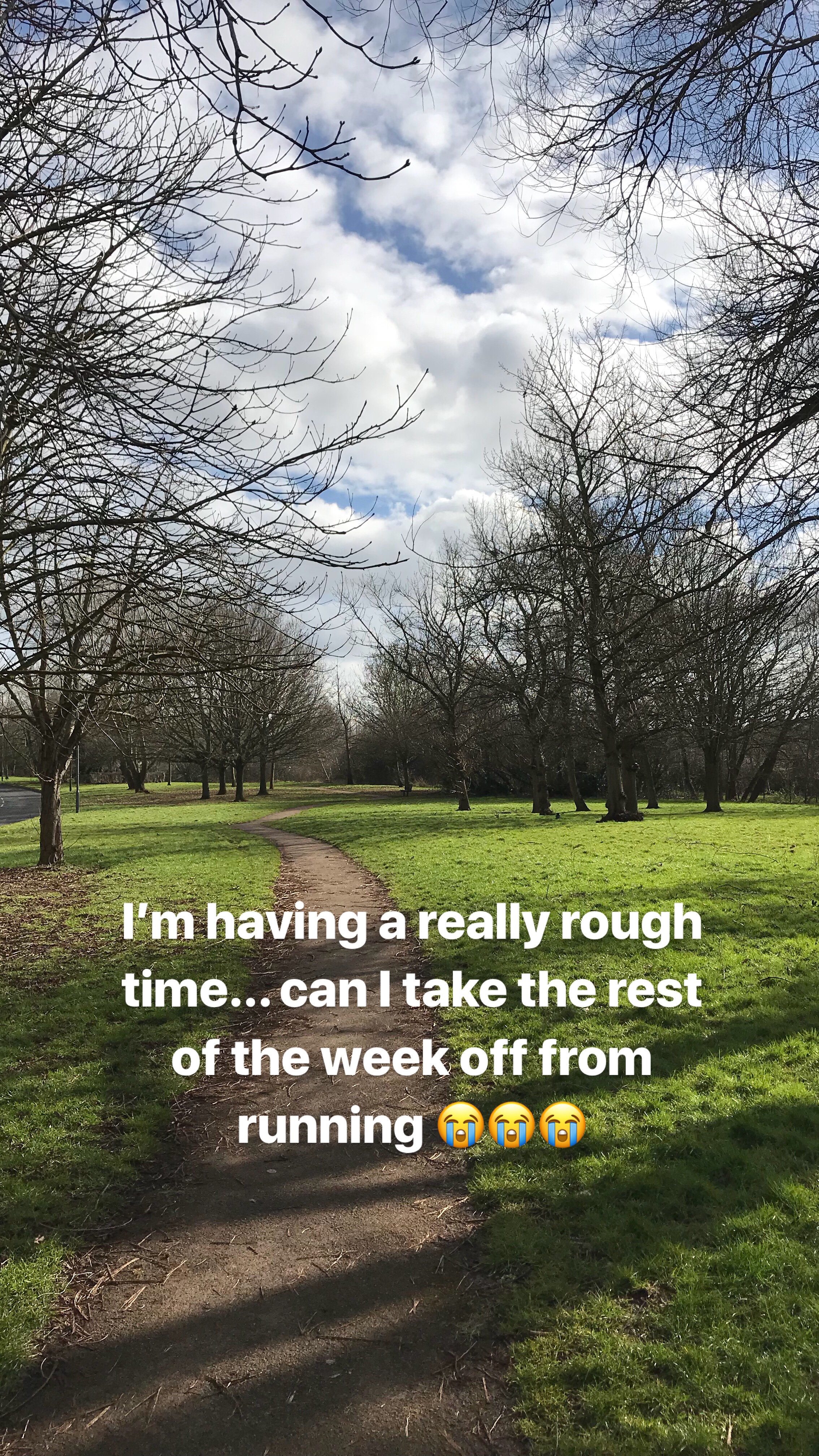 Me having a mini crisis this week

Monday | Week 7 | No Joke I had another rest day
I had a really weird day today for many reasons. While I felt motivated and confident in doing a workout DVD when I got in from walking the dog, the reality was I sat down, felt cold and miserable and ate biscuits instead. What is wrong with me??

Tuesday | Week 7 | Sad Day
I can’t even with today…. I went out for dinner with some friends which cheered me up though.

Wednesday | Week 7 | Bed Day
I literally came straight home from work and had a nap, got up, spent time with the animals and had an early night! I need to get out of this funk! 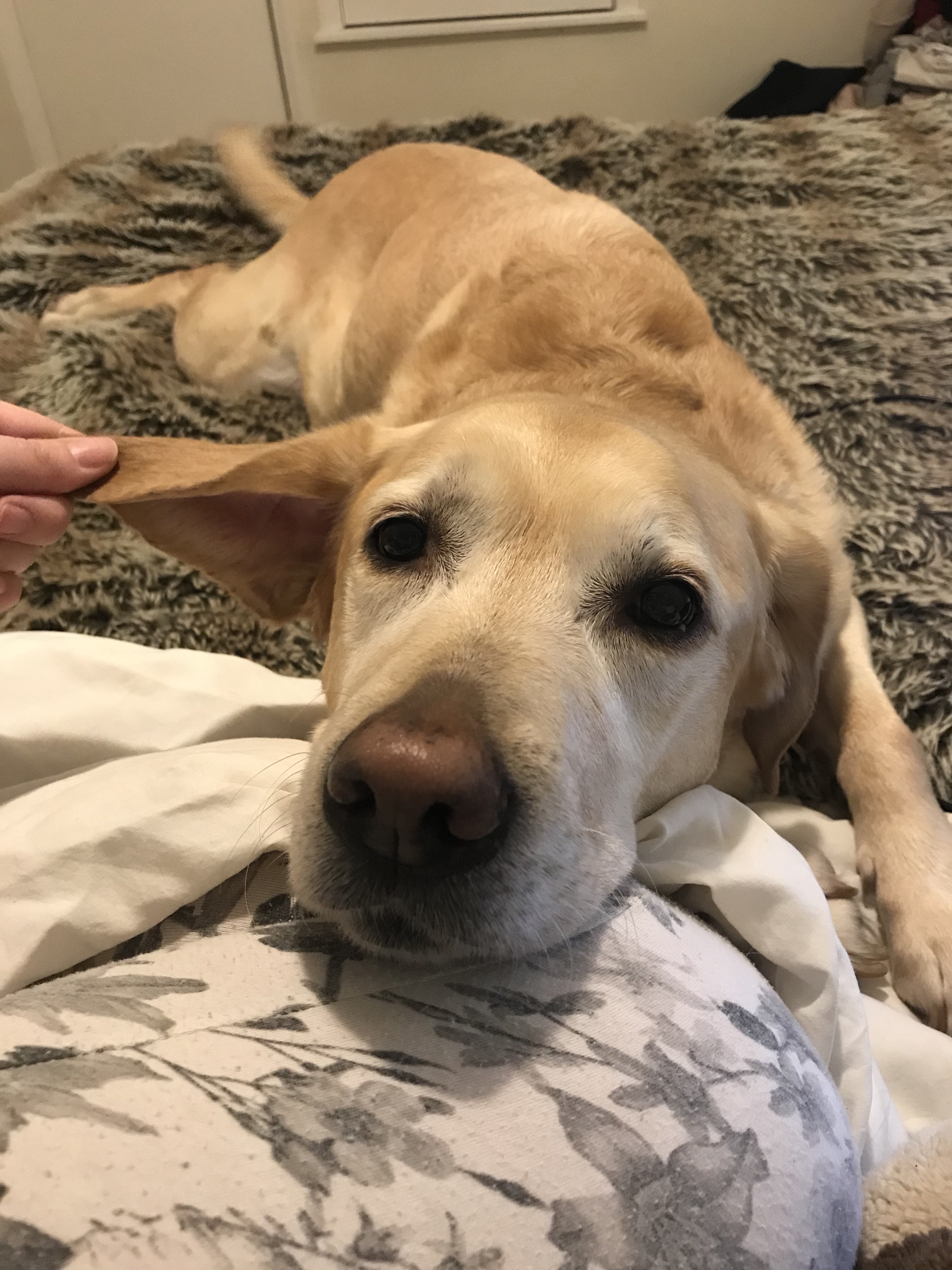 Thursday | Week 7 | 4.4 miles
Finally, I’m feeling more like myself! That may have something to do with my kind work friends and also… cake… I just went out to test the legs really and my gosh running felt so hard!!! My last run was my race at Slay The Dragon and I only did a 30 mile spin session last week. You wouldn’t think that with my relaxed attitude I’ve only got 4 weeks until my next half marathon would you?? Although, I guess everyone goes through this kind of stage at some point when they’re training so I’m not too worried. I am a tad concerned that I haven’t yet managed to get anywhere near the 10 miles that I did when I was training for my last half marathon. 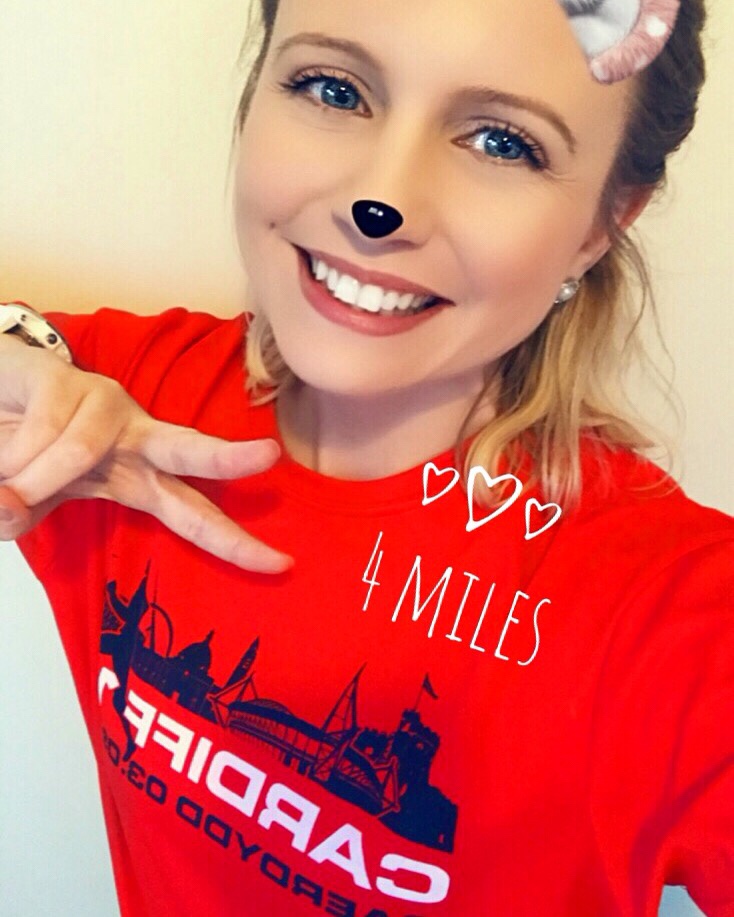 On another note, I really need to sort my diet out and I’m going to make a real effort to plan this out for the rest of the month. After my run I was starving and I thought ‘I’m going to go to the local shop and pick something healthy up for dinner’ but when I got there THERE WAS NO FOOD! Because of the snow…. which melted on Sunday… England + Snow = World Comes To a Halt… ridiculous.

Friday | Week 7 | Glorious Rest Day
Because I totally messed up my running days this week I didn’t run today like I usually do on Fridays. I did spend some time working on my blog and having a lovely tequila or two.

Saturday | Week 7 | Another Rest Day #Facepalm
Am I even actually a runner at the moment?? I know I have a lot of running shoes and I know I have a Garmin GPS tracker but…. I’ve got a race tomorrow so I can’t really do anything cardio-wise today but I SHOULD have done something instead of just working.

Sunday | Week 7 | Race Day Minchinhampton 10k yayyyyy
I’ve been looking forward to this race all week. For some, unknown, reason I’d bargained with myself that this was going to be a great race for me and I was going to get a time under an hour. I don’t know where this bravado came from and I felt a little defeated when I read the course details last night and they described it as ‘undulating’ which isn’t my strong point (although I’m much much better at running hills now, read how here). 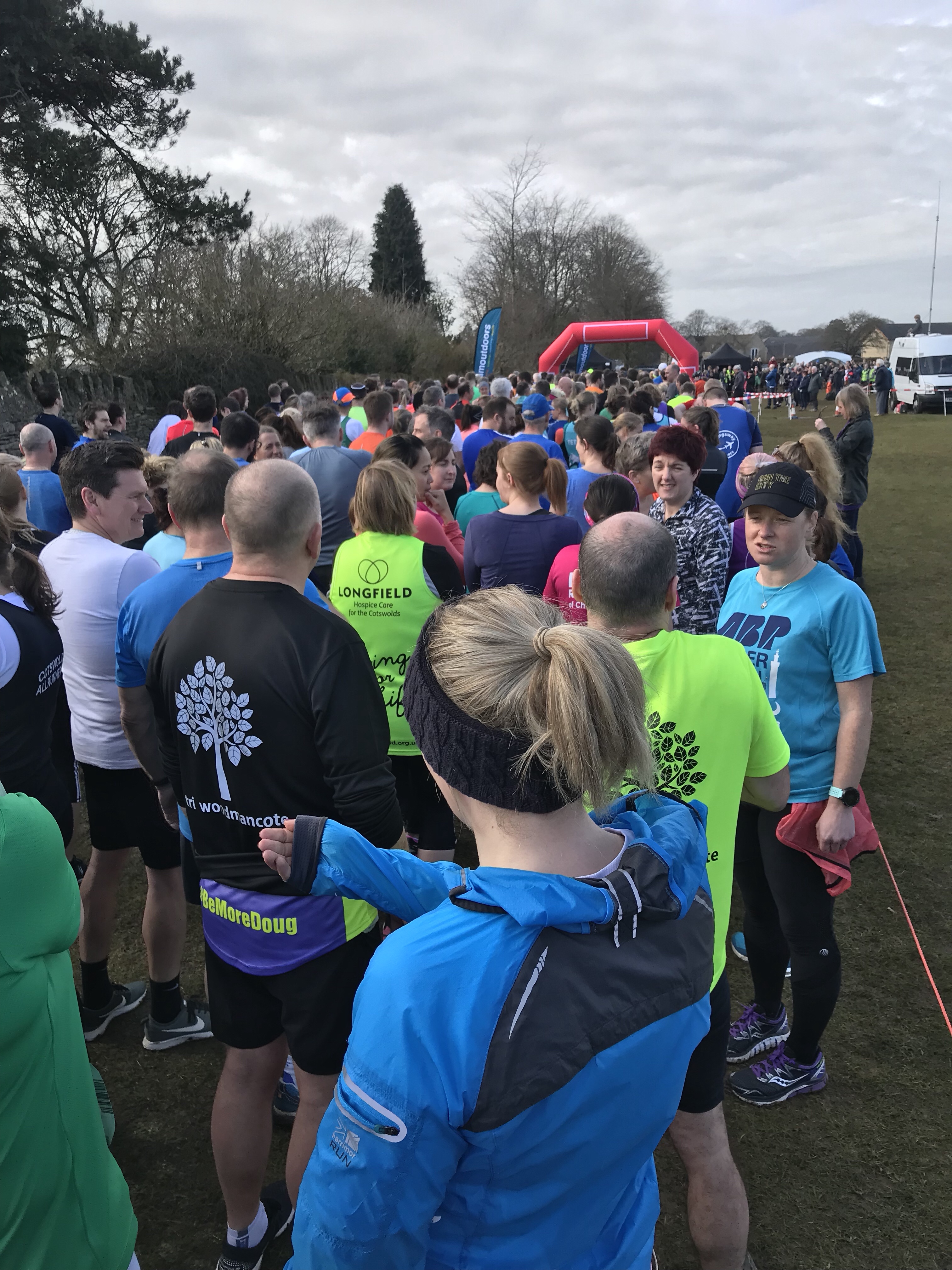 We set off around 8am and it was only a half an hour drive to race HQ through beautiful countryside, I don’t think I’ve ever been to this part of the world before. I picked up my bib and race t-shirt and we headed out to the start line. It was pretty cold waiting for the race to start and I debated whether to keep my jumper on, even though I get hotter than the sun when I’m running. 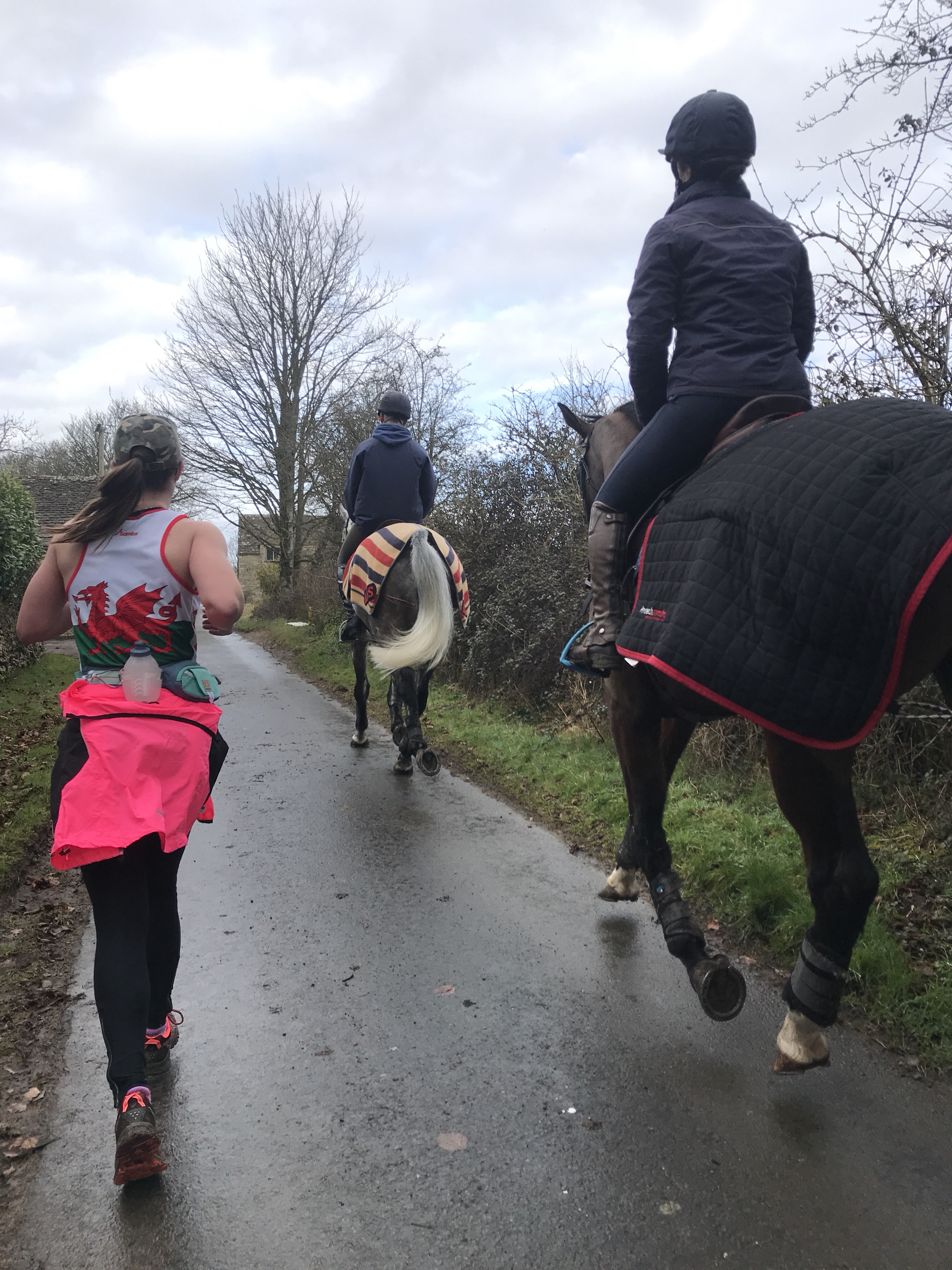 If I say so myself, I think this is a pretty awesome photo captured mid-race

I started somewhere near the back of the line, that’s where I always feel I belong and we started on time. The field at the first section was pretty muddy and really slippery in places and all I could think about was ‘if I fall over now in front of all of these people, do I get up and keep running or take it as an omen and go home’. Anyway, I didn’t fall over and we soon got out onto the country roads. 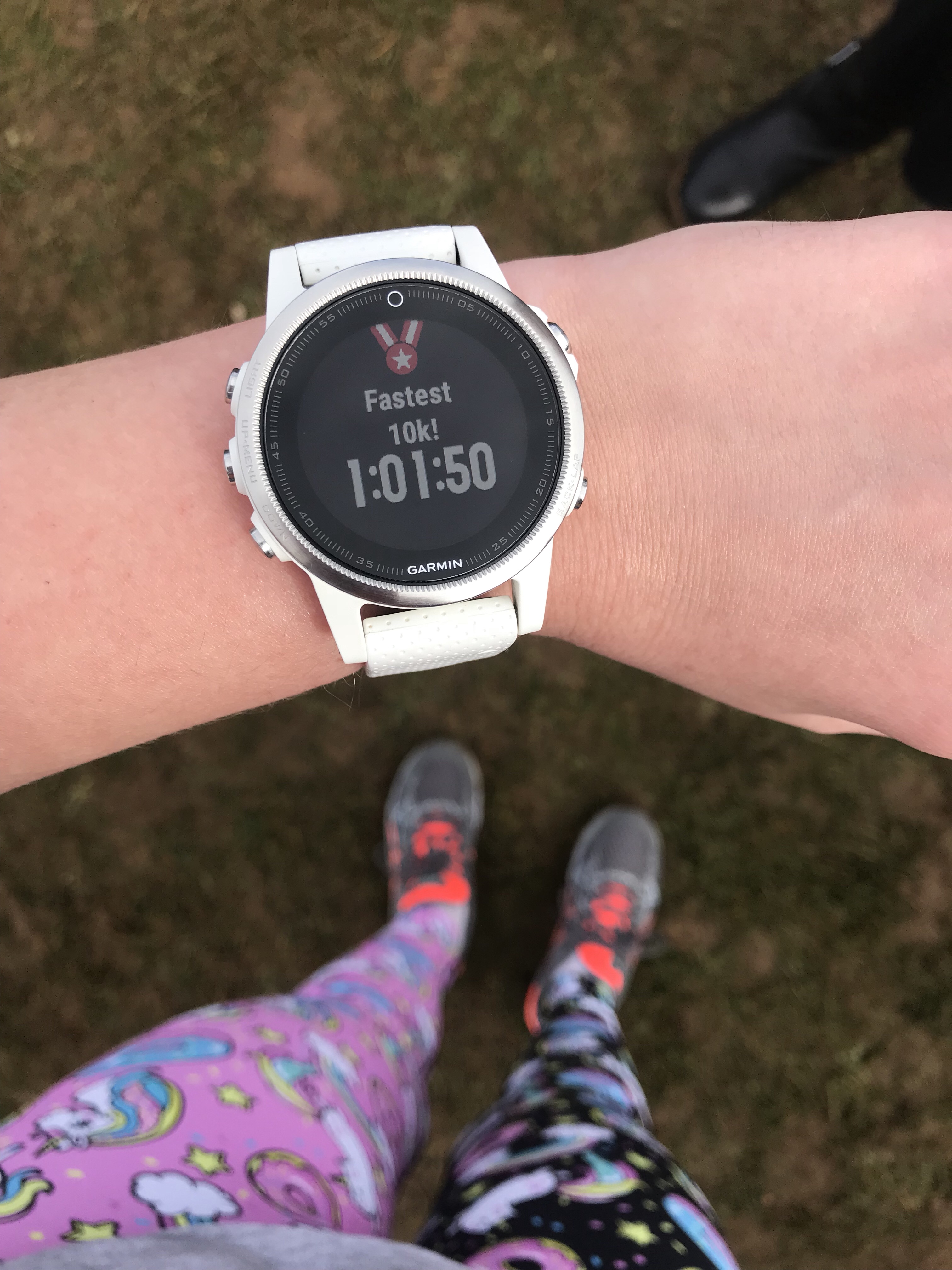 The roads around the course were pretty busy in places and at one point we were continuously being overtaken by cars which had to keep pulling aside for cars on the other side of the road, which isn’t ideal.

I have a confession… when I’m in a race, I will always get up to the runner in front of me and kind of linger behind them unless I’m feeling particularly energetic and I’ll overtake. But this time I had a completely different mindset. I decided that once I got to a runner in front of me, if I couldn’t overtake, I’d make it my mission to overtake them at some point when I felt like I could. This meant that I didn’t stay with one person for long periods of time like I usually do and I felt like I was actually getting somewhere in the race as it felt like progress to get just a little bit further ahead. This was a good strategy for me and I knew that I was pushing myself more than I usually do when in a race.

I’d also decided that if my legs hurt, so what. If my breathing was laboured, so what. I was going to push myself and keep going because I’ve run 10k races lots of times and I’m more than capable. My legs won’t hurt forever. Short term pain for long term gain right! 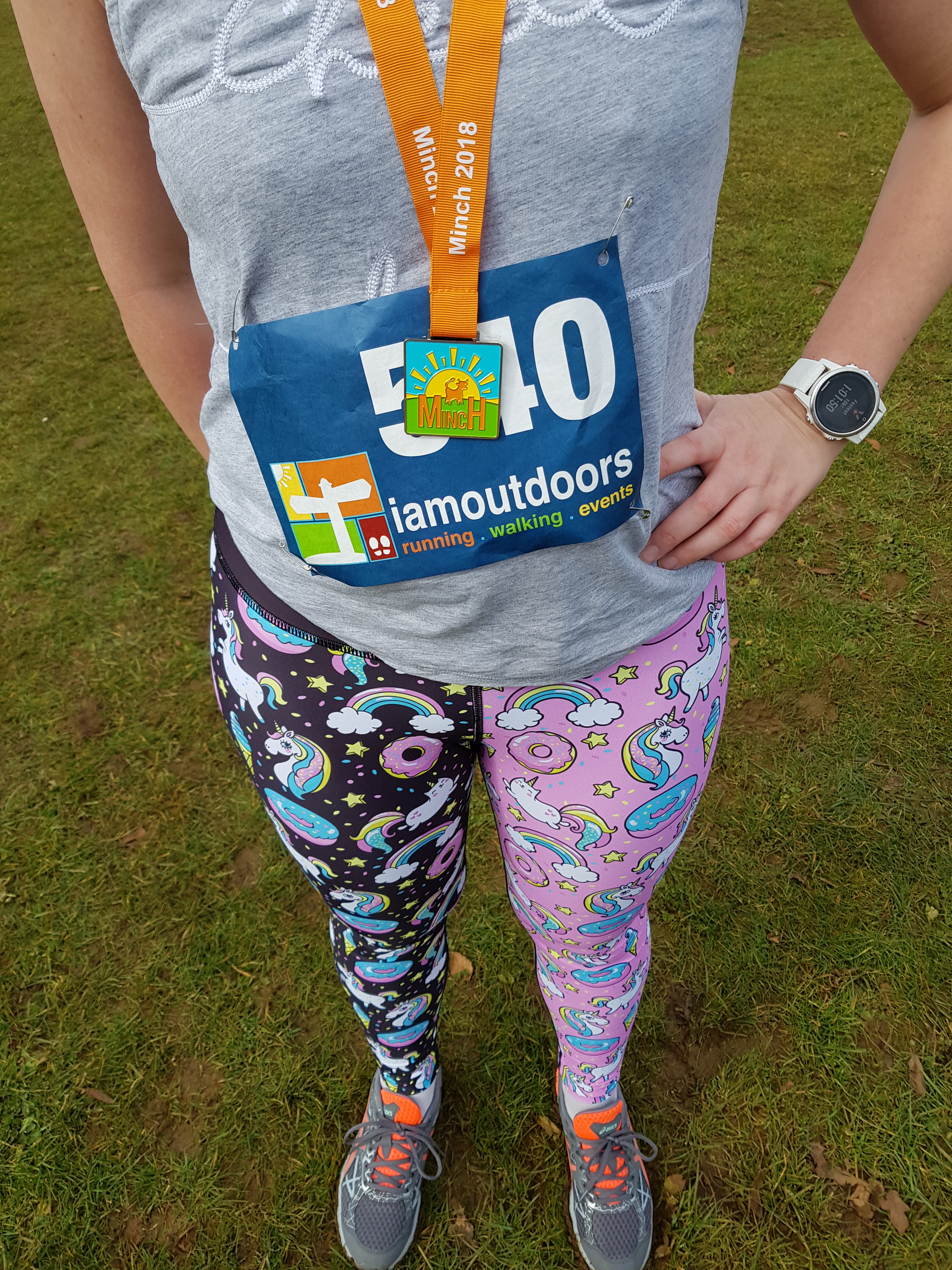 In my opinion this race was tough. The elevation was crazy and there were lots of hills. There was a lovely girl that I got chatting to for part of the way nearly at the end. It was really nice to run with someone in a race and the chatting (even if I was totally out of breath) distracted me from the pain of the final push. So I don’t know who you were but thank you so much, you were a great running buddy even if for a short time.

I realised that I wasn’t going to get in under an hour, it was going to be close, but I was so pleased with my effort, it almost didn’t matter. I couldn’t have physically pushed myself any harder today and that’s all I can ever ask of myself.

The race itself though, I absolutely loved it. It’s probably one of my favourite ones so far. The route is nice, everyone was really lovely and the medal and t-shirt were cute. I’d definitely sign up for next year and I’ll be damned if I can’t get under an hour next time. I got 3 PBs during this race (2018 PBs not all time PBs) of 10k, 5k and mile! It was those lovely downhill parts that did it!

So that was my week! I have a pretty hectic week next week but I’m feeling better about things so I know I can smash out some good runs. My next race is on the 25th and I am feeling super confident now that I really am going to smash this one. I’ve run this race before and it’s an out an back, fairly flat route. I managed 1:04 last year so let’s see how I get on this year. 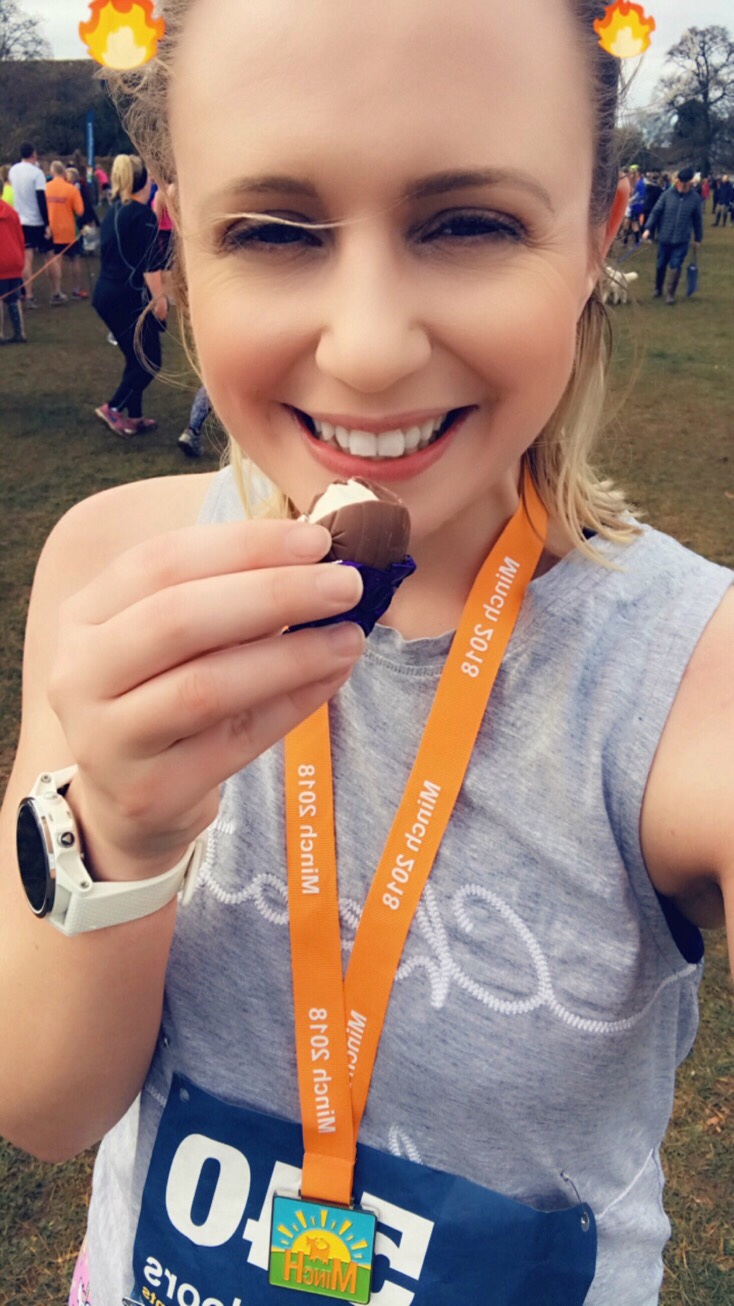 When they handed me this creme egg I was ecstatic

Has anyone got any tips for getting yourself out of a funk because I feel like this won’t be my only one?